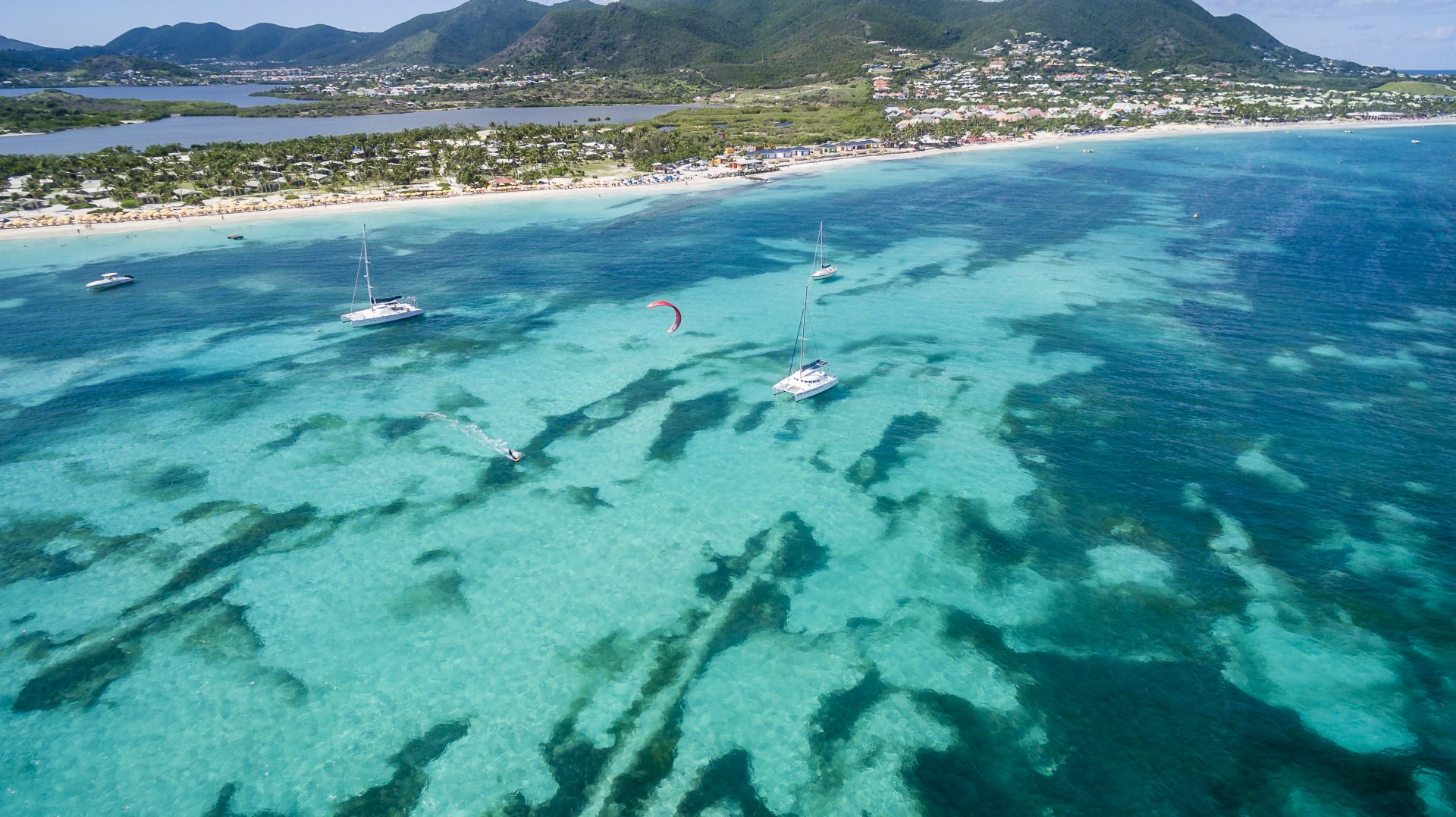 Charter a Yacht in Saint Martin

Saint Martin is an island split into two halves. The French-governed north is known as St. Martin, while the Dutch-governed south refers to it as St. Maarten. It’s the smallest island in the world under the governance of two countries.

As you’d expect, a plethora of cultures, customs and cuisines meet Caribbean charm, creating a popular destination among the charter vacation jet set.

Watersports are plentiful here, and there’s a range of colorful marine life to explore too. Luxury hotels and restaurants have created a place to relax and unwind, and there is no better place than to do just that, than from the turquoise waters.

A Luxury Charter to Saint Martin

Saint Martin, Saint-Martin, Sint Maarten, whatever you call it, call it paradise. Lying in the bright, dappled gem waters of the Caribbean Sea, about 190 eastward bound of Puerto Rico the island of Saint Martin is two parts made whole. Half of the 34-square mile island belongs to the French Republic, while the Kingdom of the Netherlands made Dutch claim to the southern half. But regardless of whatever half of Saint Martin you find yourself in, its natural beauty knows no sides.

Christopher Columbus spied the island on November 11, 1493, which fell on the feast day of Saint Martin of Tours, and so the island received its name in the saint’s honor. But when Columbus footed ashore, he found that Carbi-amerindians and indigenous Arawaks already inhabited the island. Like any island country discovered by quenchless foreign explorers, its history soon spiraled into violent skirmishes between the French, English, Dutch, Danes, and Spaniards. Saint Martin would eventually be divided in a near-even split (although if you ask the Dutch locals, they may say otherwise), with the Treaty of Concordia in March of 1648.

Naturally, there are stark cultural differences that manifest on either side of the island. The French side has a flare for nude beaches, shopping featuring high-end boutiques and chic clothing, and the prevailing French love of wine. The Dutch favor their nightlife that raves into the twilight hours of the morning, expertly crafted jewelry, casinos, and the Dutch drink of choice being anything rum-based, guava berry liquors. When chartering to Saint Martin, you can truly enjoy the best of both worlds, as traveling between the two sides doesn’t often require full border checks.

Marigot is the starring city and capital of Saint-Martin within the French territory of the island. Here, you’ll find much to do, as the city is booming with outdoor markets, stunning beaches busy with swimmers, water skiers, and scuba divers, restaurants coaxing passersby with intoxicating smells of local cuisines, shopping, and historic forts. But elsewhere in the city are quiet coves, the tranquil views of Friar’s Bay, and the sleepy hills that rest just outside the bustling city streets.

Plane-spotting is a perfectly acceptable hobby on Maho Beach, where jets thunder through the air, taking off and landing, just yards above this small piece of beach. For a quieter spot of beach, there’s Cupecoy Beach, secluded and tucked away by encircling limestone cliffs, where a day spent sunbathing, surfing, snorkeling, or swimming is set against a paradisiacal backdrop. At Mullet Bay Beach, sugar-white sands embrace your wandering footprints up and down its sandy stretch, and at Kim Sha Beach, rent a jet ski and hit the sapphire-blue waves for a day on the water near several restaurants and bars for those hungrier moments.

Sint Maarten, the Dutch territory, is home to the capital of Philipsburg, nestled in a narrow stretch of land that falls between the Great Bay and Great Salt Pond. The boardwalk is lined with lively beachfront bars along Great Bay, Front Street is flanked with duty-free ships and casinos for those feeling lucky, and the city is home to St. Maarteen Zoo with exotic animals as its residents, and the Sint Maarten Museum, where Arawak artifacts are displayed. Little Bay Beach unfolds a sandy stretch with candy blue waters lapping against its shore, perfect for a day beneath peaceful palms. Fort Amsterdam presents ruins from the 1600s, outfitted still with intact cannons and unbeatable views of surrounding bays and beaches.

Go to Happy Bay Beach, where you can snorkel in this secluded, untouched slice of paradise. For a deep dive into nature, visit the Butterfly Farm, a gorgeous garden teeming with species of butterflies where a guided tour will enlighten you on these delicate and lovely winged creatures. At Rainforest Adventures, Rockland Estate in Sint Maarten, zip line through the Caribbean’s best views in this famed ecological park, or make a trip to Seaside Nature Park and see the 30-acre park up close on horseback, while camping, or weaving through the scenes on a hiking trail.

Find a piece of pop culture at the Yoda Guy Movie Exhibit in Philipsburg, where Star Wars props, costumes, and gifts are excitedly on display by special-effects designer Nick Maley. At Casino Royale, light it up on the craps table, try your hand at poker, or just soak in the flashiness of the neon-infused night. Find yourself on Creole Rock, snorkeling in waters bluer than the clear Caribbean sky, at Pinel Island, where peaceful waters welcome divers and swimmers alike, or in Pelican Key, a charming seaside resort.

Simpson Bay Lagoon will be a definite—the largest inland lagoons in the West Indies in the Caribbean, it is a sight to see. Two small islands are settled within its warm waters: Grand Ilet to the north on the French side, also dubbed the Explorer’s Island, and Little Key to the south, on the Dutch side. Seagrass and mangrove habitats thrive here, under careful protection, and the waters are brimming with darting reef fish, which breathes life into the island’s other flourishing areas like Mon of War Shoal Marine Park and Reserve Naturelle de Saint-Martin.

For the highest point amongst a series of resting hills Saint-Martin and commanding views of the island, make the trek up to Pic Paradis to its peak of 1,391-feet. At Loterie Farm, bring the family to the 135-acre nature sanctuary outfitted with days’ worth of activities that immerse guests in the surrounding nature with zip lines, hiking trails, and bars, restaurants, and pools fueling up and relaxing in between.

Venture to Saint Martin on a Private Luxury Charter

Boredom is impossible on Saint Martin, whether you’re on Saint-Martin or on Sint Maarten. Between the island’s culture clash of the good-time Dutch and the fine-living French set on nothing short of absolute paradise, time spent on either side of Saint Martin has all the ingredients for an unforgettably thrilling time. The island, two-parts together, has a distinct personality that cannot be found anywhere else in the world—not in Europe, not in the Caribbean—only on the Friendly Island.

VIEW ALL YACHTS IN SAINT MARTIN