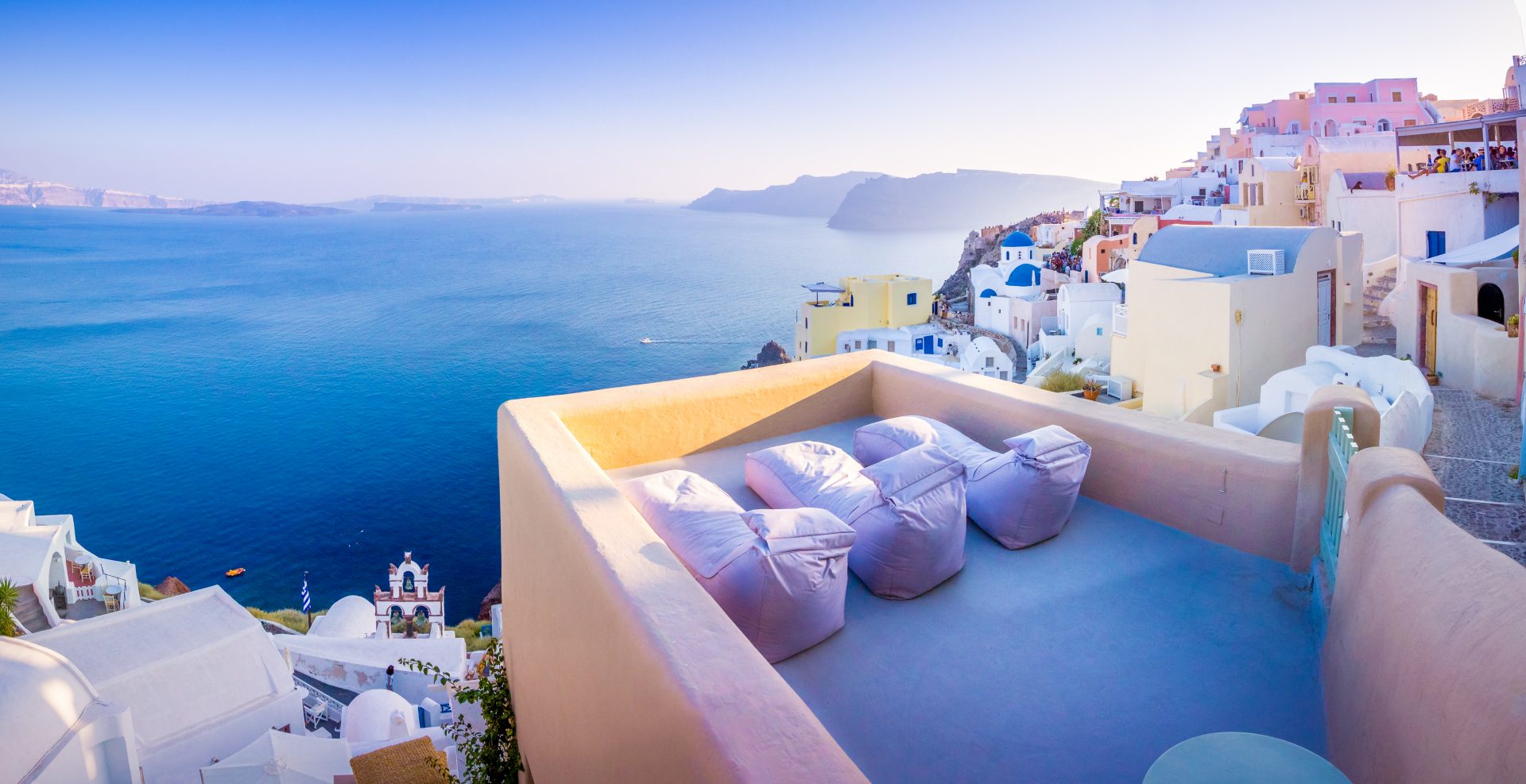 Charter a Yacht in Santorini

Santorini has all the credentials of a Greek island experience, and is the main island in the Cyclades archipelago.

This island has as much history as it has beautiful scenery, formed from a volcanic eruption in 1500 BC, which left a crescent shaped rim of cliffs.

These cliffs tower above the cobalt waters of the Aegean Sea, making it as iconic in its beauty and hint towards its mythical Greek legends.

The south eastern corner of the island is perfect for trying out the watertoys on board you luxury charter yacht and also boasts a lively nightlife with a great selection of chic bars and restaurants.

120 miles southeast of Greece is Santorini, an island that concludes the Cyclades group of islands as its southernmost piece of a tropical utopian puzzle in the sparkling waters of the Aegean Sea.

In the 16th century, Santorini was the site of the largest volcanic eruption in record history, an eruption so ferociously devastating, that it’s been said that the eruption could also be indirectly be blamed for the collapse of the Minoan civilization on the island of Crete, 68 miles south of Santorini. But whatever the eruption leveled in its destructive wake, its molten-hot force would forever shape Santorini, molding it into the rugged, wild, and rough island that we walk on to this day.

The Greeks paid no mind to Santorini’s craggily shores, steep bluffs, and razorback hills. In similar fashion to the Grecian mainland and cousin islands, shell-white, cubiform houses fill the island, often adorned with bright, azure hued roofs, nestled close, and connected with whitewashed walls, running through the island as if to corral the buildings into neat groups. At night, a soft glow fills the spaces of its towns, and it feels as if you’re walking though an old fairy tale where the coldness of modern life is worlds away.

At Santorini caldera, you can see for yourself the ancient submerged volcano that once laid waste to the region thousands of years ago. The caldera can be spotted from various high points of the island, or from peak points in Santorini’s sister islands in its group, but for a more exhilarating view, get onboard a boat for a guided tour. Ancient Thera, like the Santorini caldera, will transport you back through time on this fallen city on a ridge of an ancient mountaintop. Hike the winding road from Kamari to see the slate gray stones of the Agora, the Basilike Stoa, the theater, and ancient sites for the gods that date back to the time the Theras inhabited the island from 9th century BC to 726 AD.

Paralia Vlichada unfolds a scene of commanding cliffs that curve in union with a sandy beach drenched in the warm Aegean sun as waters bluer than sapphires splash against the bluffs. For sunbathers, swimmers, and beach walkers it’s the perfect secluded spot to chase away the afternoon. Perissa Black Sand Beach calls to anyone curious to see if the name fits the reality—and it does. Black sand fills the beach like graphite of a pencil as startling blue waters wash against its shores.

Santorini loves its wine. You would be remised if you didn’t stop at Santo for a tour of the winery to enjoy a glass of the finest while watching the pastel colors of a sinking sun. Fill your glass again at Argyros for further wine inspection, then again at Gavalas Winery, or at Artemis Karamolegos, or at Domaie Sigalas, and be sure to top it all off at Koutsoyannopoulos Wine Museum, where you’ll learn the regional winemaking history along with more wine tasting in an underground cave museum.

See the red cliffs of Ammoúdi on Santorini’s northern tip, a peaceful little town suited with a tranquil bay, beaches, and taverns to quench your afternoon thirst. Make the climb at Skaros Rock to be rewarded with the most unrivaled view of island, and at Red Beach, join fellow photographers in capturing the majesty of this wild beach at he foot of a steep, sun-red cliff. Seek out another iconic landmark in Santorini at the Three Bells of Fira, where the famed whitewashed church sits peacefully by the bright waters of the Aegean Sea, topped with remarkably stunning blue dome.

Visit the Folklore Museum to catch glimpse of Santorini’s storied past, then travel to the Byzantine Castle Ruins to be witness to intact ruins with astounding ocean views atop a hill. Make time to jump aboard a boat and speed off to Nea Kameni, a small uninhabited volcanic island where a simple climb will place you on the crown of an ancient volcanic mountain that rests in a flooded caldera. And on Therasia, Santorini’s sister island, explore this sparsely populated, relatively untouched piece of wild land.

Land the color of rust is an unshakable sight to see at Playa Roja as the rocks and sands are the shade of blood red, a stark contrast against the beach’s clear turquoise waters. In Oia, visit the Oia castle where you will be gifted unbeatable sunset views on the entire island. Although, you may want to visit the Akrotiri lighthouse, built in 1892 and one of the country’s oldest to catch a sunset or two, as it’s a popular place to watch the sun lazily drop into the horizon.

Check out 11th-century, pristinely preserved frescos at Pangia Episkopi, a domed church that sits in central Santorini. Visit the Prehistoric Town of Akrotiri, a preserved, excavated site that allows visitors to walk among the ruins of an ancient civilization, examine maintained frescos, artifacts, and collected objects from a peoples centuries ago. For a sharp turn into the uniquely odd but delightfully fun, stop by Tomato Industrial Museum, where yes, it is as it sounds, a deep dive into Santorini’s tomato paste industry through a former factory turned museum.

Become intimate with the culture of Santorini and visit Mati Art Gallery, where ocean themed art reigns supreme in the form of glass, metal, and vivid colors inspired by the sheer beauty of the Greek island. Stop by White Beach for iceberg-like rock formations that aggressively jut from the gem colored waters, or walk along Monolithos Beach to feel the grey-white sand between your toes. Catch aerial views on the Santorini cable car, connecting the port with the town of Thera.

With such a calamitous volcanic past, Santorini’s modern landscape has undoubtedly rose from the ashes to form an unparalleled piece of beauty known to few places in the world. Truly, this is a sliver of Greece, but Santorini has grown into its own personality, fitted with utterly unique natural beauty from its rust red cliffs to its ash black sands, woven with recognizable Grecian imagery throughout: whitewashed cubiform houses adorned with beautiful blue domes. Santorini was created from destruction but was revolutionized by it.

VIEW ALL YACHTS IN SANTORINI