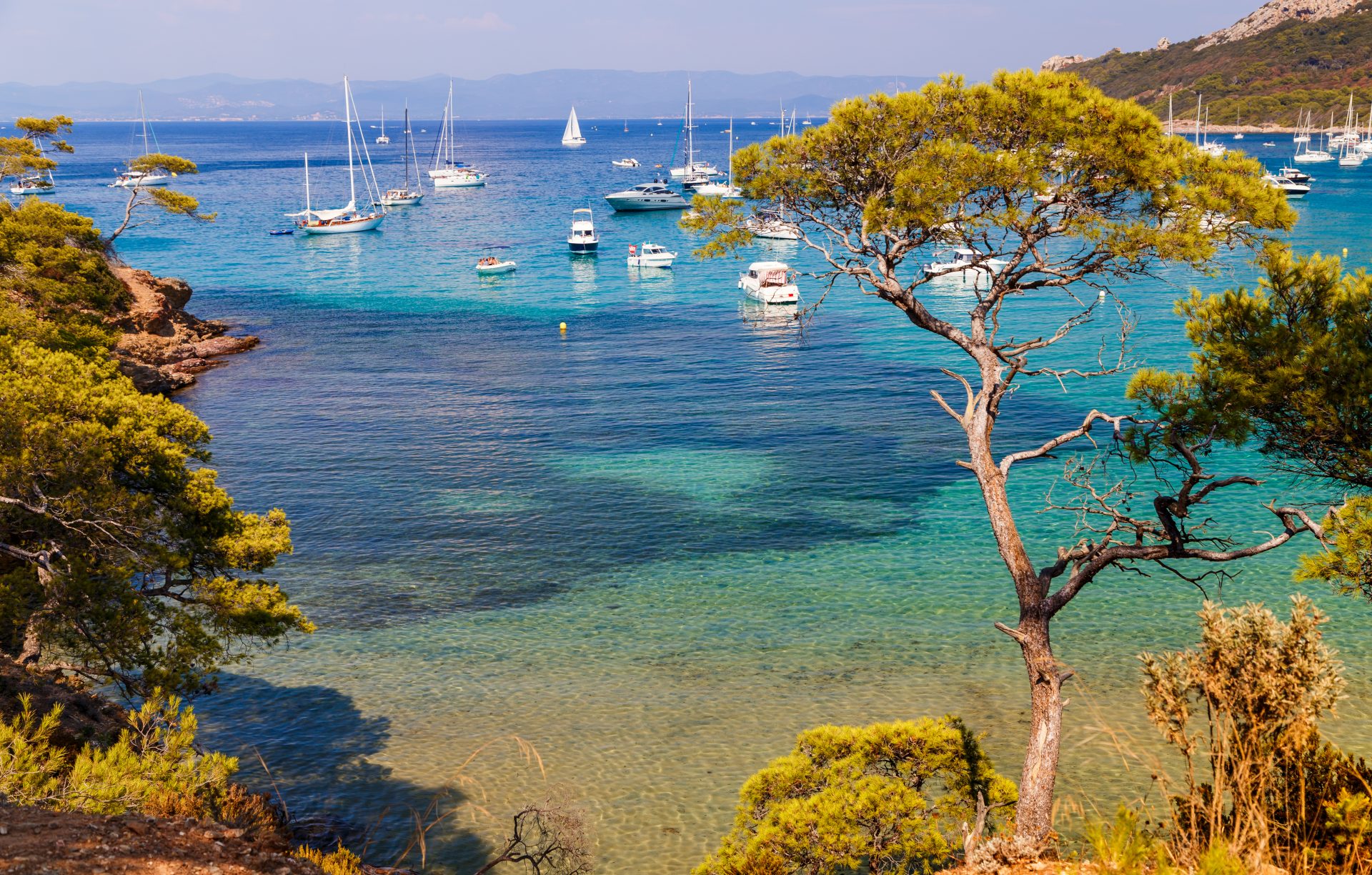 Charter a Yacht in Porquerolles

A Luxury Charter to Porquerolles, France

Untouched sans for nature’s own paintbrush, the carefree brushstrokes of Porquerolles, an island in Hyères, France, birth a scene of a preserved tropic amongst an unbounded wilderness of untamed forests, sheltered beaches, and a quaint village humbled by remoteness.

Only around two hundred people call the four-mile island home, with its small village’s roots twisting back to the recent past of 1820 and titular lighthouse erected not long after in 1837. Its history is far less dramatic than the surrounding lands of France, its sovereign political territory to the north, or even the nearby islands of Corsica and Sardinia to the southeast.

There’s a sense of romanticism that blossomed the modern scape of Porquerolles—in 1912, the entire island was purchased by a Belgian entrepreneur, François Joseph Fournier, as a wedding present for his wife, who then proceeded to swiftly plant 500 acres of vineyards across the rich land. Nearly six decades later, the state would purchase a portion of the island back to preserve it, sanctioning 80% of it off as a national park and conservation area. And so modern day Porquerolles remains part rolling vineyards with unique, regional wine, and part uncultivated land, stolen away from the greedy hands of mankind and their destructive modes of industry.

Your Private Charter Itinerary to Porquerolles

Although the island of Porquerolles feels reminiscent of a near-uninhabited desert island, complete with crooked trees jutting from the rocks of its beaches that follow the curve of a scythe, its only a mere twenty minute boat ride from Hyères. Stumbling on the Plage de Notre Dame at the right time of day confirms that you aren’t alone, either, as white sailboats dot its bright blue waters, bobbing together like a flock of gulls. Down the coastline is the less occupied Plage de la Courtade, another crescent shaped curve of beach, empty of beachgoers to make for long, uninterrupted walks on its golden sands.

One of the island’s few remnants of the past resides in sterling condition: Fort du Grand Langoustier—or rather, Fort of Grand Langoustier. Its construction took place in the 17th century and a recent renovation brought the squat, square fort back to its original formidableness. Fort St. Agatha, too, still stands after its years protecting the coast from vicious attacks with its sturdy cannon tower. Now, after centuries have past since it was originally built in the 16th-century, it serves as exhibition in dedication to the history of the small island. Fort De Repentance can be found overlooking Notre Dame beach, towering and aggressive in its hilltop position, making for some of the best views on the island.

One might think Porquerolles as a primitive place with its small population not even reaching a few hundred people, but the island is home to Fondation Carmignac-Porquerolles, a contemporary art center, newly opened to the public as of 2018 featuring the vibrantly dazzling pop art of artist Edouard Carmignac’s 30-year career. Walking through its gardens and touring the span these pieces that pointedly comment on the bizarre oddities of pop culture anchor your intimacy to the mainland of France’s nearby shores.

Plage noire du Langoustier, a sunny stretch of beach with pines that crest from shoreline rocks welcomes beach walkers, swimmers, and those looking to kick back for an afternoon, and in similar fashion is Plage du langoustier, with grey sands that birth a wide stroke of beach where deep blue waters roll onto its shores. Tucked away in a secret cove is Calanque du Brégançonnet, a sheltered spot where visitors can soak in the scenery at its observation deck and walk down to its small spot of beach.

Later in the day, head to Gorges du Loup, a rocky enclave where the tall, stony bluffs of Porquerolles rise up to form a narrow, protected strip of sapphire-blue waters. The cove encompasses this perfect swimming spot, which is easily reached with a novice hike—a refreshing reward for a journey’s end, topped with views of passing ships in the outstretched waters and the setting sun sinking in the distant horizon. Make time to visit the Domaine Perzinsky winery and vineyard for winetasting and pure admiration of the small island’s ability to give way to such regional delights.

A reasonable hike will take you to the observation deck of Moulin du Bonheur with sweeping, panoramic views of the island, and similarly, a climb of Phare de Porquerolles lighthouse will present you with a stunning glimpse of your surrounds. Walk, trek, hike, or bike your way to Plage d’Argent, a lovely beach whose sands glow in the afternoon sun, and head to the thin strip of beach at Plage de l’Almanarre, a protected bay ideal for windsurfing and kite surfing. Take an easy stroll through Maison Du Parc Et Jardin Emmanuel Lopez—Botanical gardens with winding pathways shaded by lazy trees swaying in motion from the island breeze.

Visit the village’s church of Église Sainte-Anne de Porquerolles. A humbled, eggshell white exterior gives way to an elegantly designed interior setting of worship, ushering in sun-wearied members of its congregation to its cool, tiled indoors. Even less frequented than the island of Porquerolles itself is Île du Petit Langoustier, a stroke of land off of Porquerolles’ Pointe Sainte-Anne on its westernmost side. Here, sunset views are unobstructed, the land essentially untouched, and the tranquility unknown to the rest of the modern world, making this small islet the perfect place to steal glimpses of sunsets without interruption.

Set Your Sails to Porquerolles on a Private Luxury Charter

Porquerolles feels like worlds away from the chaos of modernity despite being minutes from Hyères’ shores. The island is an undisclosed, hidden gem of France, relatively unknown to the jet-setting community of luxury living, high-end, resort-seeking travelers, and should you visit the island, you should feel so lucky that it has closed itself off to such. Preserved and protected, Porquerolles is an accomplishment of the beauty nature can achieve when left undisturbed by mankind—it’s wild, a cornucopia of life, with a distinct French connection to its mainland, just miles away.

VIEW ALL YACHTS IN PORQUEROLLES