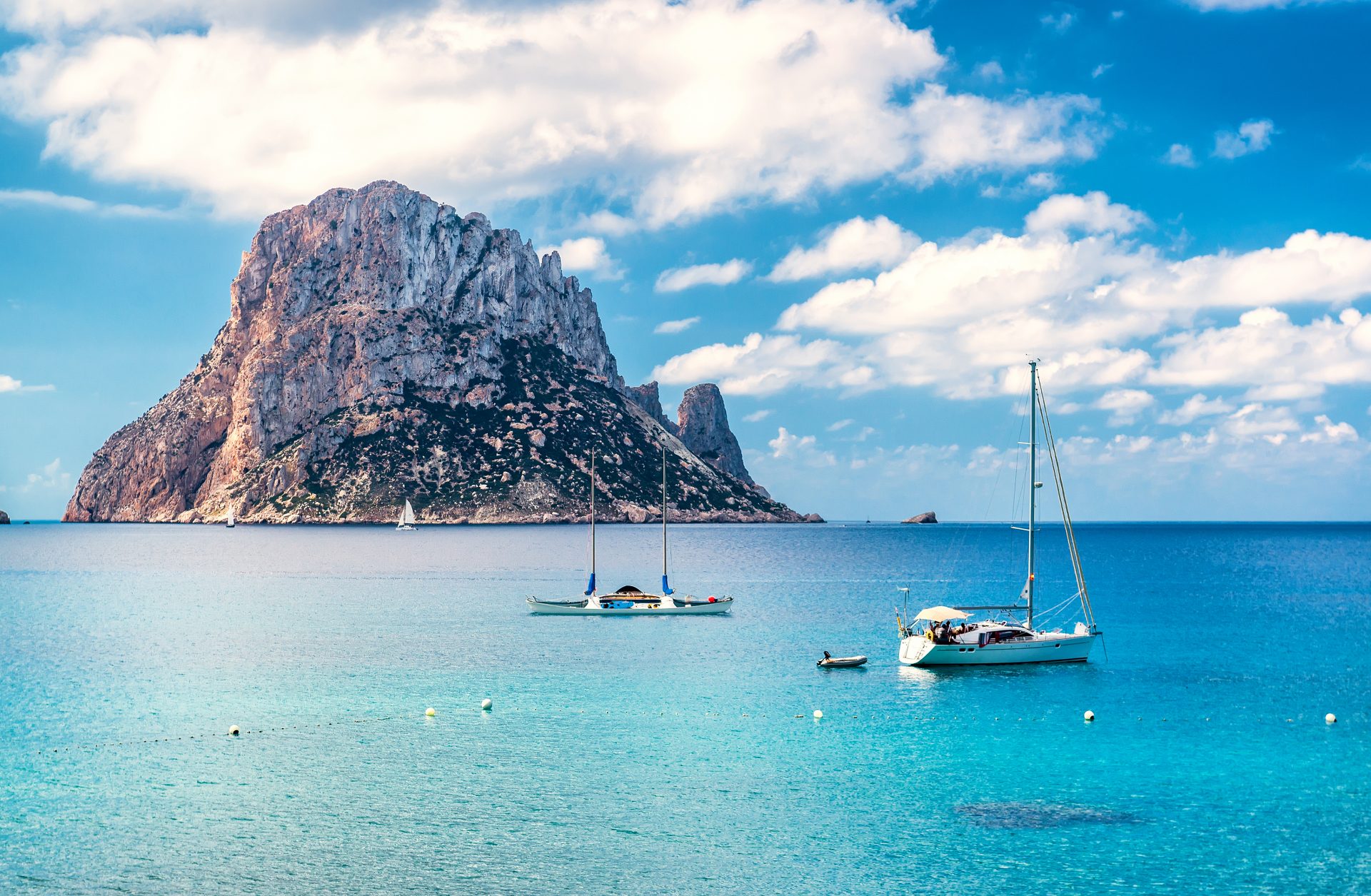 Charter a Yacht in Ibiza

A Private Charter to Ibiza

In Ibiza, the music doesn’t stop. The clubs throw their doors open as the rhythms and beats leak out onto the streets. The music’s vibrations electrify the city, and the drinks flow through the crowd of dancers and those perched at the bars.

If you’re looking for a good time, the Spanish island of Ibiza is your place. The third largest of the Balearic Islands, Ibiza is a short jaunt of ninety-three miles into the Mediterranean Sea from the Spanish city of Valencia, on Spain’s eastern coast.

The island’s first port was established in 654 BC, and soon after, Ibiza earned its reputation as a major trading post. Efforts were made to control the island, but Ibiza ducked destruction through a treaty with Rome. When Rome fell, though, invasions erupted, but a period of self-governance emerged until King Philip V of Spain decidedly adopted the island as apart of the Spanish Crown in 1715.

Travelers finding themselves on the rock island of Ibiza are likely driven there by a thirst for wild adventures seeded in all-night dance parties and raves. There’s an added perk of emerging out of a club to be greeted by Ibiza’s bright sunrise, an explosion of colors, warming the white beaches and Mediterranean waters. The party scene exploded in the 1960s, transforming into contemporary clubs adapting to modern elements. Four of Ibiza’s original clubs still open up to party-goers to this day: Pacha, Privilege, Amnesia, and Es Paradís, all of which continue to reign supreme in dominating Ibiza’s nightlife.

The pulsating nightlife is held together by DJs and performers, their significance made evident in each carefully selected track laid, every new song debuted, and their keen ability to read the club’s mood.  It’s not just the nightclubs that hold the corner on Ibiza’s music. Festivals like Ibiza Rocks usher in renowned bands to solidify Ibiza’s place in themusic scene landscape.

As the beats ring out in the city, there is tranquility on the coastline. Cala d’Hort and Cala Salada unfurl golden beaches against strikingly blue waters for a day well spent snorkeling, swimming, sailing, and sun bathing. S’Espalmador, a private island, pulls in yachts for its quiet, secluded beaches and long soaks in natural mud baths.

In a rare escape stands Es Vedrà, an island with no inhabitants but full of legends and myths. A journey to Es Verdrà is an exploration in Ibiza’s mythology, where whispers of sirens, sea-nymphs, and lunar goddesses cloak the island in mystery and intrigue.

The naturally contoured island is known for its cave formations, like Cova de Can Marçà, where guided tours and a waterfall light show can illuminate their hidden intricacies. Aquarium Cap Blanc takes Ibiza’s caves to the next level – installing a quaint aquarium in the mouth of a formation. The island coastline folds into coves: Cala de Sant Vicent, Cala Salada, and Playa Cala Xarraca.

The coves and inlets aren’t far from the nearest restaurant, a blessing when it comes to Ibiza’s Mediterranean cuisine. The food in Ibiza is its own form of music, a melodic blend of Mediterranean and Balearic traditions with a hint of Spanish influence. Arroz de Matanzas is sung differently in each household. Classically, it’s a broth reduced – starring saffron, mushroom, and whatever meat is freshly cut (like pork, fish, squid, or chicken). Ibizan chefs, with the islands access to its crystal waters, love to compose a good seafood paella, fish stew, or set fresh catches to a charcoal grill for parrillada de pescado. It wouldn’t be a proper meal without a glass of cold sangria, with its refreshing assemblage of fruits, which are a perfect remedy for Ibiza’s hot afternoons.

Outside of Ibiza rests the archaeological site of Sa Caleta Phoenician Settlement, a rocky headland where Ibiza’s first known visitors, the Phoenicians, acquired a foothold after their arrival in 650 BC. More of the early settlers’ footprints can be discovered at Puig des Molins, where the museum has meticulously collected artifacts and other findings from tombs to share Phoenician history. Because of these crucial findings, most of Ibiza has been declared a World Heritage Site.

Exclusive resorts like Platja d’en Bossa and Port de Sant Miguel are gateways to clubs, restaurants, and prime beaches. They are equipped with an endless caravan of staff to refill drinks and lend a bit of local advice. The market Punta Arabi can’t be missed if you wish to pick up handmade crafts, art, and the best of Ibiza’s food. Cala Saladeta, a beach that caters to its visitors with traditional Ibizan snacks and drinks makes for an excellent, indulging afternoon. For more rugged scenery, visit Cala Codolar, a beachfront engulfed by staggering bluffs, but not short of Ibiza’s crystal waters rolling onto its pebbled shores. To truly immerse yourself in Ibizan terrain, a hiking trip to Torre del Pirata, a path that is determined to challenge even the most versed hikers.

Your Extraordinary Luxury Charter to Ibiza

As the nightlife thumps and throngs of people dance to house and trance music in exclusive clubs, the noise that’s left outside of the city is simply the sound of lapping water against whitewashed cliffs. Ibiza excels as a hostess because it can easily show you both sides of its culture, one that lets its soul fly against the music, and the other that resides peacefully meditating on serene sandy shores.

VIEW ALL YACHTS IN IBIZA