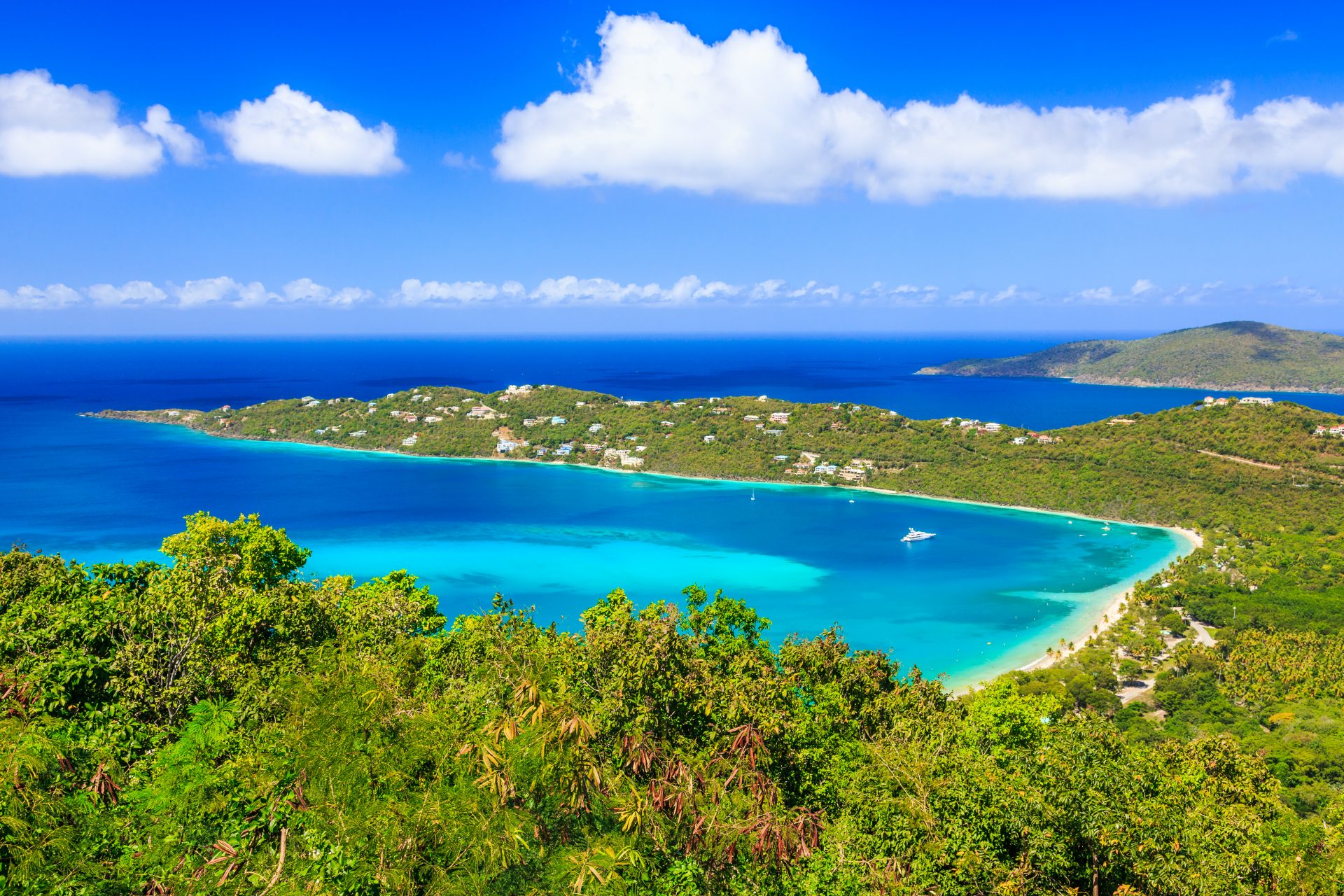 Charter a Yacht in Virgin Islands

A Luxury Charter to the Virgin Islands

The Virgin Islands—a yachter’s delight and any traveler’s escape into utter paradise. The islands sprawl across the Caribbean Sea and Atlantic Ocean with histories that have led them to be divided into three different politically government jurisdictions: the British Virgin Islands, the United States Virgin Islands, and the Spanish or Puerto Rican Virgin Islands.

The U.S. Virgin Islands is comprised of the three main islands of Saint Croix, Saint John, and Saint Thomas, along with a smattering of minor islands that surround them, making a total land area of just 133 square miles, about twice the size of Washington, D.C. Until 1916, these islands were previously known as the Danish West Indies under the rule of the Kingdom of Denmark-Norway when they were sold to the United States, becoming an organized, unincorporated United States territory.

On St. John, known to locals as “Love City”, the Virgin Islands National Park encompasses nearly 60% of its land. Visitors can wander through its protected area of vibrantly green forests, wading swaths of mangroves, and explore the patches of coral reefs visible through clear, turquoise waters beyond the island’s bleach-white sandy shores. Cinnamon Bay in the north presents the ruins of a plantation from the 1800s and as its name hints—sugar sands extending towards waters best for snorkeling.

St. Thomas, “Rock City” is where Blackbeard’s Castle stands tall, a hilltop watchtower built in 1679. Magens Bay is to the north, with shockingly blue waters best for swimming and splashing, and to the south, Hassel Island and Water Island, two brushstrokes on a tropical scene. And on St. Croix, “Twin City”, there’s the popular uninhabited Buck Island, home to its Buck Island Reef National Monument—a snorkeling hotspot with a winding underwater trail through colorful beds of coral reefs.

The British Virgin Islands are known simply as the Virgin Islands, or BVI, a mere few miles east of the U.S. Virgin Islands, with the archipelago’s total land mass no greater than 59 square miles. The Islands consist of the main islands of Tortola, its largest and home to its capital of Road Town, Virgin Gorda, Anegada, and Jost Van Dyke, along with fifty other smaller islands, islets, and cays, 15 of which are uninhabited. Yachts fill its harbors and bays, navigating its steady, easy waters, divers seek out underwater caves hidden beneath bright patches of reefs, and tourists walk along its sugar sand shores, breathing in its salt air and laid back vibes.

There’s much to explore on BVI, like Peter Island, a small, private island with resorts and hiking trails through its forested hills, the Baths, a beach with curious rock formations, secret caves, and pools, Norman Island, unoccupied and privately owned with snorkeling caves resting beneath clear waters, and Necker Island, another private island featuring a luxury resort owned by Sir Richard Branson. Kite and windsurf on the waves of North Sound Road or Apple Bay, and be sure to buzz over to Mosquito Island, a hideaway ideal for newlyweds, scuba divers, and sailors.

There’s Cane Garden Bay, where the sands are as white as the cumulus clouds floating above, Guana Island, a nature reserve where the hills and valleys tangle with steamy, tropical forests, Copper Island, an enticing place for scuba divers to explore a wreck in its crystal waters, and White Bay, sheltered, relaxed, and where the boaters move with the waves. Scuba dive around rocky Ginger Island, sail the waters of Great Camanoe for day beneath the sizzling sun, and always opt for a tour of the Callwood Rum Distillery. At Gordo Peak National Park, take the intricate network of hiking trails to the island’s highest peak to bear witness to staggering views.

On Scrub Island, honeymooners take residence at Scrub Island Resort, sailors and boaters dock at a busy marina, and every evening, the sunset dazzles watches with a sky painted with soft pinks, purples, and blues.

East of Tortola and over the Queen Elizabeth Bridge is Beef Island, quaint and charming, equipped with an airport, beaches, and a small town with craft shops and cafes, wafting the smell of coffee into the streets. At Saba Rock, find yourself on this small island just an acre in size, hitting the local hotel, restaurant, and shops, and let the busy ports of Great Harbour in Jost Van Dyke welcome you into its gem tinted waters.

Elsewhere in the Caribbean are the Spanish Virgin Islands, formerly called the Passage Islands, now belonging to the Commonwealth of Puerto Rico. With sleepy cays, wide, white sands beaches shaded by swaying palms, and idyllic diving, swimming, and snorkeling spots under the surface of shimmering waters. Flamenco Beach stretches out for a mile, unfurling a blanket of eggshell white sands, Zoni Beach is home to friendly sea turtles nosing their way through the crystal sea, and visit the uninhabited, small island of Cayo Luis Peña, where a nature reserve protects pristine beaches with nearby hiking trails through its wild, tropical scenes.

Seek out exotic species of birds, native plants, and marine life at the Culebra National Wildlife Refuge, feel the soft sands of Melones Beach between your toes, and make a trip to the waters of Play Tamarindo Grande for a full day of snorkeling with the fish and fellow sea creatures. Sail the blue-green waters of Ensenada Honda,the largest inlet on the island of Culebra, also known to the locals as both “Puerto Grande” and “Bahía Honda” for its elongated shape, and charter over to Cayo Norte, a private, hilly island sheltering endangered turtles.

A Luxury Charter to the Virgin Islands

Although the Virgin Islands are divided amongst three different political sovereignties, the geologically dispersed archipelago shares one thing in common: its sweeping natural beauty. Paper white sands outline each island, islet, and cay as brilliantly blue waters wash over its shores, making the collection of islands each their own utopian piece of paradise settled in the Caribbean Sea. For years, the Virgin Islands have held the world’s attention as the most sought out getaway spot and it doesn’t show signs of stopping anytime soon.

VIEW ALL YACHTS IN VIRGIN ISLANDS