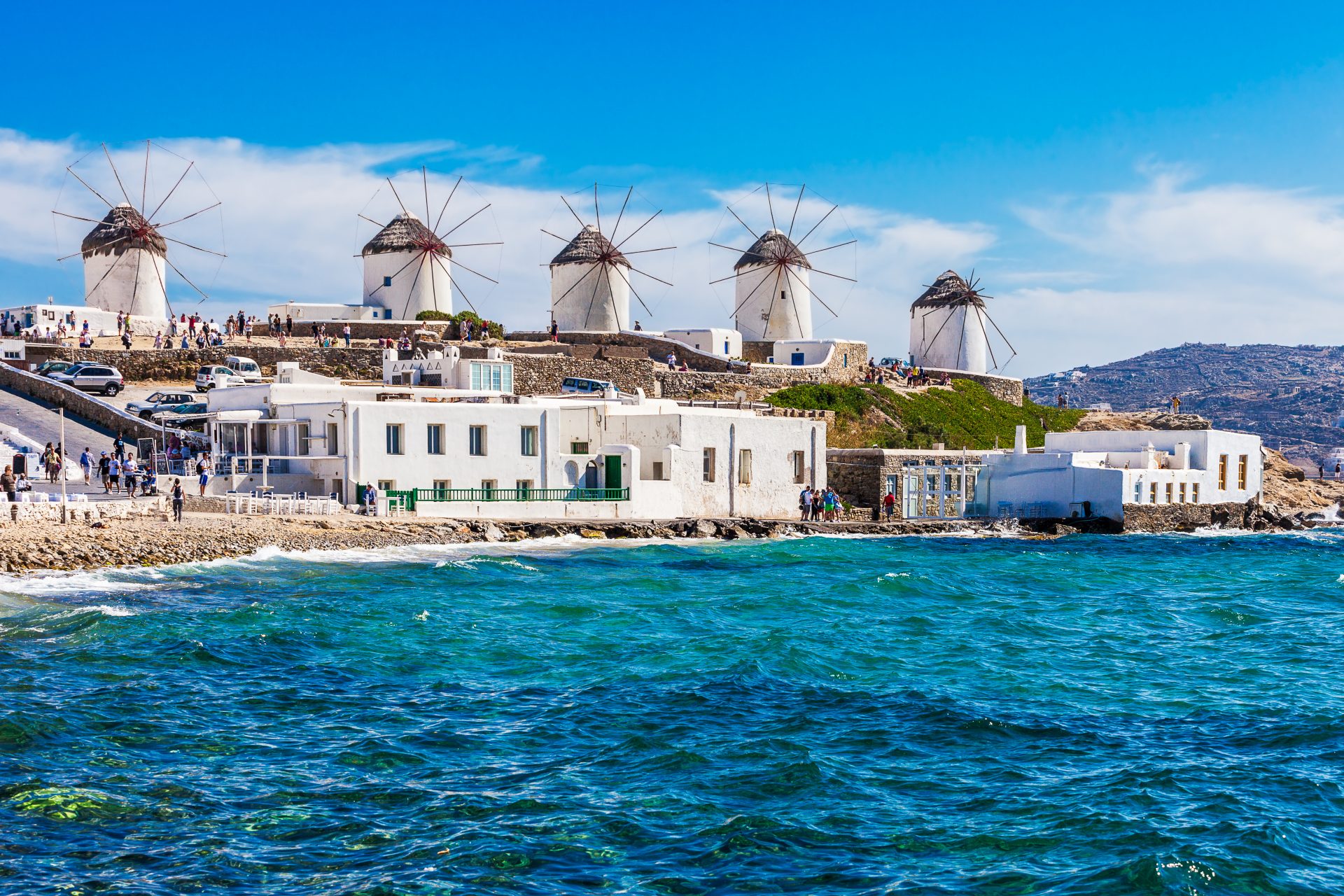 Charter a Yacht in Mykonos

Mykonos was discovered by the bohemian travellers of the sixties and has quickly become known for its party appeal.

While it certainly offers an array of glittering nightlife, the island is an example of natural beauty and Greek traditions. Mykonos offers a wealth of bars and restaurants in the hustle and bustle of its party regions, but also provides a more secluded getaway to the north.

A mixture of busy and secluded beach hotspots can be found here, and a number of annual events take place on the island.

Those seeking thrills and spills will find water sports aplenty, and endless countryside to explore.

A Private Charter to Mykonos, Greece

Mykonos, a thirty-three square mile dot resting between its neighbors: Tinos, Syros, Paros, and Naxos, a squad of Greek islands known as the Cyclades. What makes Mykonos stand out amongst this bunch? If you can’t already hear it, it’s the feverish nightlife that floods the scene from sunset till sunrise, a siren call to free the spirit to the beat of the music, no matter who you are.

Your backdrop as you navigate Mykonos will be set against the sapphire waters of the Aegean Sea, so blue that it blends with the sky above. Its horizon is only broken by the ivory-white cubiform houses that fill the humble city skyline. Mykonos is full of delightful contradictions, a chic boutique a stone’s throw from an archaeological site, a whitewashed centuries-old church near a booming nightclub, high-end eateries a skip away from the sacred Greek site of ancient Delos.

Mykonos is the place where our 21st century clashes with its ancient roots, creating a vortex of polarity that forms a cultural experience that is both startlingly distinct yet utterly captivating. Mykonos’ old and new become an odd-couple, but in a marriage that fulfills the needs of a perfectly balanced holiday.

Spend a day at Ftelia, a sandy spot of beach with crystal blue waters perfect for swimming, splashing, windsurfing, and when hunger hits, wander to the nearby restaurant for some traditional Greek food while soaking in the views. At Agrari beach, the southern strip of Mykonos, wade into blue-green waters as you relax for an afternoon beneath the hot, South Aegean sun.r

You’ll quickly take notice to the abundance of churches on the island.  Most notably is the Church of Our Lady, or Panagia Paraportiani, one of the most famous architectural buildings in all of Greece. You will find that this church isn’t ornate, but its presence is stunning. White as a pearl, simple in style, and decidedly unique – Panagia Paraportiani is actually comprised of five separate churches joined together. The original construction began in 1425 and its completion would not take place until the 17th century—200 years later.

For a lively scene, there’s Kalafati Beach, where there’s always something happening. Snorkel, windsurf, jet ski, or sail in the warm waters that lap against this bustling piece of shoreline. For a slice of romance, visit Houlakia Beach, or wind down your day in a rentable chair on Agios Stefanos after indulging in the nearby restaurants, and don’t forget about Super Paradise Beach, where the scenery and action puts meaning behind its endearing name.

Transport yourself back in time with a visit to the Archaeological Museum of Mykonos, built in 1905 and one of the oldest museums in Greece. The museum houses artifacts from the Putrefaction Pit, dating back to 425 BC. Make time to see the Aegean Maritime Museum as it tells the tale of the long-standing romance between the Greeks and the Aegean Sea. And don’t forget the Folklore Museum. It’s the oldest house on the island, highlighting 19th-century Greek life in its collections, including integral weapons used in the Greek War of Independence. Cap off your tour of Mykonos with Lena’s House, a still preserved, 19th-century Mykonian residence that was once home to a wealthy shipping family.

Locals will direct you to Little Venice, a row of fishing houses in a neat line along the waterfront that once welcomed home rich merchants and captains. Now, Little Venice is the spot for sunset seekers, filled with an air of romance that artists often flock to capture the beauty of the Mykonian coastline. Some of the former houses have been converted to chic bars and cafes, and if you find yourself in Little Venice, you might also see pop-up galleries and exhibitions from local artists as well.

Just as Little Venice holds certain fondness on the island of Mykonos, so do the Windmills of Kato Mili. These seaside windmills aren’t starkly modern, tall and minimalist in their cold design like the ones that dot the hills near booming European metropolises. The Mykonos windmills are humble, built in the 16th century by Venetians and capped with wood and straw, the Kato Mili windmills stand in a row in an epitome of quaintness, crowning a hill that overlooks the sea.

Follow a sandy path up a steep hill and you’ll discover the Armenisti lighthouse, reaching toward the sky as it stands on the peak of the hill. And much like the majority of buildings in Mykonos, it’s pearl white, simple, and striking. While chartering in Mykonos, visit the island of Delos close by. To say that Delos is a sacred site is an understatement—it is perhaps the most significant mythological, historical, and archaeological site throughout Greece. It’s something you will surely feel through its energy and the through words of the locals.

Before parting Mykonos, say hello to Petros the Pelican, a quirky celebrity found on the town’s waterfront. Petros, a pelican made stray by a storm, first took residence on Mykonos in 1954, becoming so beloved by the locals that he was named the official mascot. Although the original Petros passed away, a tradition was born to elect a new Petros to uphold the legacy.

Mykonos, the “Island of the Winds”, has a charming personality unlike its cousin islands in the Cyclades group, one that draws visitors from across the globe into its curvy, ancient streets, lined with remarkably uniform and squat white houses. Mykonos is as endearing as it is edgy, a city of true duality, and one that it knows how to balance through a sheer lust of life.

VIEW ALL YACHTS IN MYKONOS