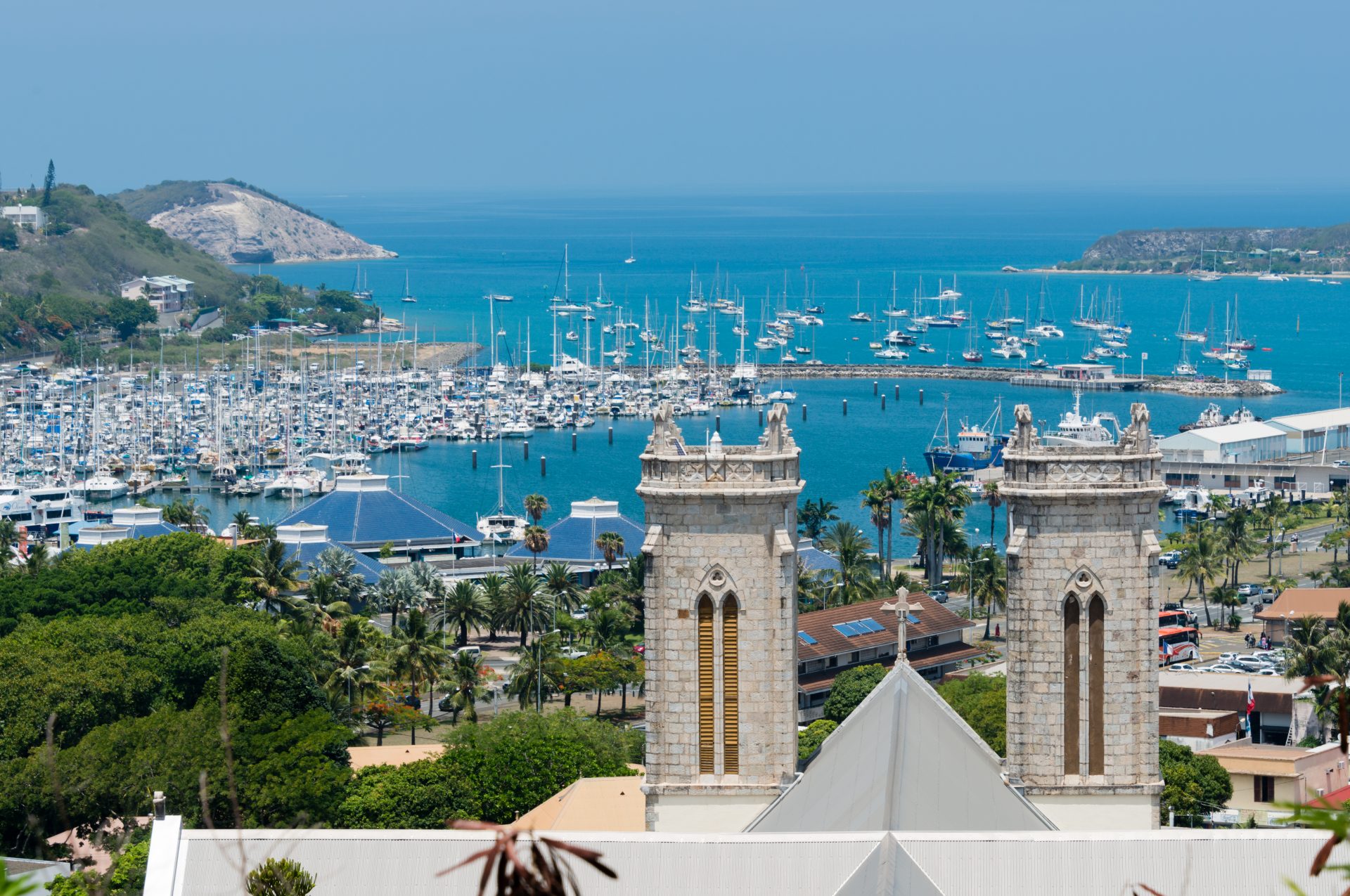 Charter a Yacht in New Caledonia

There’s a group of islands just off the eastern coast of Australia, a mere 750 miles, and the collective goes by the name of New Caledonia. The dozens of islands have planted themselves in the ideal spot in the southwest Pacific Ocean, gifting its 7,172 square miles of land area with a steamy tropical climate that bathes the occasionally mountainous terrain with glorious rays of sun that further cultivates the vibrancy of its lush vegetation, golden savannahs, steady plains, and stunning coastlines.

Although it is a French territory, New Caledonia is home to the descendants of the original inhabitants of the island, the Kanak people, as well as descendants whose ancestors hailed from Europe and France, Polynesian peoples, Southeast Asians, and a small number of peoples of Pied-Noir and North African descent.

Despite being a small collectivity, New Caledonia is not without a bustling capital city, Nouméa. The city is situated on the main island, Grande Terre, and serves as a melting pot to the various ethnicities that call New Caledonia home, creating an utterly unique cultural dynamic. In Nouméa, there’s a striking tribute to native Kanak influences at Jean-Marie Tjibaou Cultural Centre, designed by Renzo Piano to resemble a traditional Kanak structure. Coconut Palm Square is the central pavilion, shaded by lazy green trees with wide walking paths, ideal for a relaxed exploration of this South Pacific city.

For the best view of the island, visit the Amédée lighthouse. Built in the 1860s, this metal lighthouse is one of the world’s tallest, and the height it reaches rewards its climbers with sweeping panoramic views. A more down to Earth spot is the slice of beach in the southern bit of Nouméa, Plage de l’Anse Vata, where spending the day beneath swaying palm trees or on its grassy strip is a must. And for a modern delight, there’s Nouméa Cathedral, an impressive 19th-century cathedral equipped with twenty-six magnificent stained glass windows and a carved altar as its crowning jewel.

What culinary delights can you expect in an island imbued with such starkly different ethnic groups? For one, there’s bougna, a favorite traditional meal among the Kanak peoples, and like the original natives themselves, the ingredients harness the natural bounty of the land. It’s made of chicken, lobster, or fish, depending on whatever the fresh catch may be, mixed with root vegetables like the prevalent source of New Caledonian yams and sweet potatoes, with a splash of coconut milk, all cradled by banana leaves. The key, however, is the way bougna is cooked. South Pacific cooking methods call for an earth oven, hot rocks that grill and bake the food in true islander fashion.

French influence can be discovered in vol au vent des fruits de mer, a savory seafood chowder-like filling enwrapped by a puffy pastry, combined with a delectable cream sauce to bring the flavors round. On the Isle of Pines, enjoy the local endemic delicacy of snail in the form of bulime. Not to be missed is the rare blue prawn, a coveted dish worldwide and grown here in New Caledonia, where the prawns feed on plankton in New Caledonian lagoons turn hinted blue. Due to the plethora of deer roaming the island, venison makes its way into a multitude of meaty dishes, on skewers, as the starring protein in salads, or served up with veggies and brown sauce.

If you feel as if there’s something about New Caledonia that is unlike any other place, you’re right. The creatures and plant life that inhabit these beautiful islands are unique to New Caledonia’s geographical location, creating a thriving union between chance and evolution, nurtured by the territory’s extraordinary environment. Endemic species, a species restricted to a specific area, are found all over the island: the New Caledonian crow (whose noted tool-making abilities is superior to even those of primates), the adorable and agile kagu, eleven species of endemic fish and fourteen species of crustaceans flood the rivers and lakes of New Caledonia, and not to mention the countless number of unique plant species only found on the islands.

In Nouméa, you can get up close to some of New Caledonia’s native animals at Zoo Forestier Michael Corbasson, a sprawling botanical garden and zoological park that features creatures that fly, crawl, and roam on foot. For animals that swim, there’s Aquarium des Lagons Nouvelle Caledonie, which houses a diverse variety of turtles, fish, and marine life. Of course, Nouméa is also in close proximity to natural wildlife due to its location on the peninsula in the southern part of Grande Terre. There’s Îlot Maître, a stones throw from the city where sea turtles can be found among scuba divers and honeymooners.

For a small strip of island with its neighboring thumbprints of isles, New Caledonia is an explosion of biodiversity set in paradise. What makes it so unique amongst its cousin islands in the South Pacific is the creatures and peoples that walk its lands, all who contribute to make this territory extraordinary and unlike anything else in the world.

VIEW ALL YACHTS IN NEW CALEDONIA