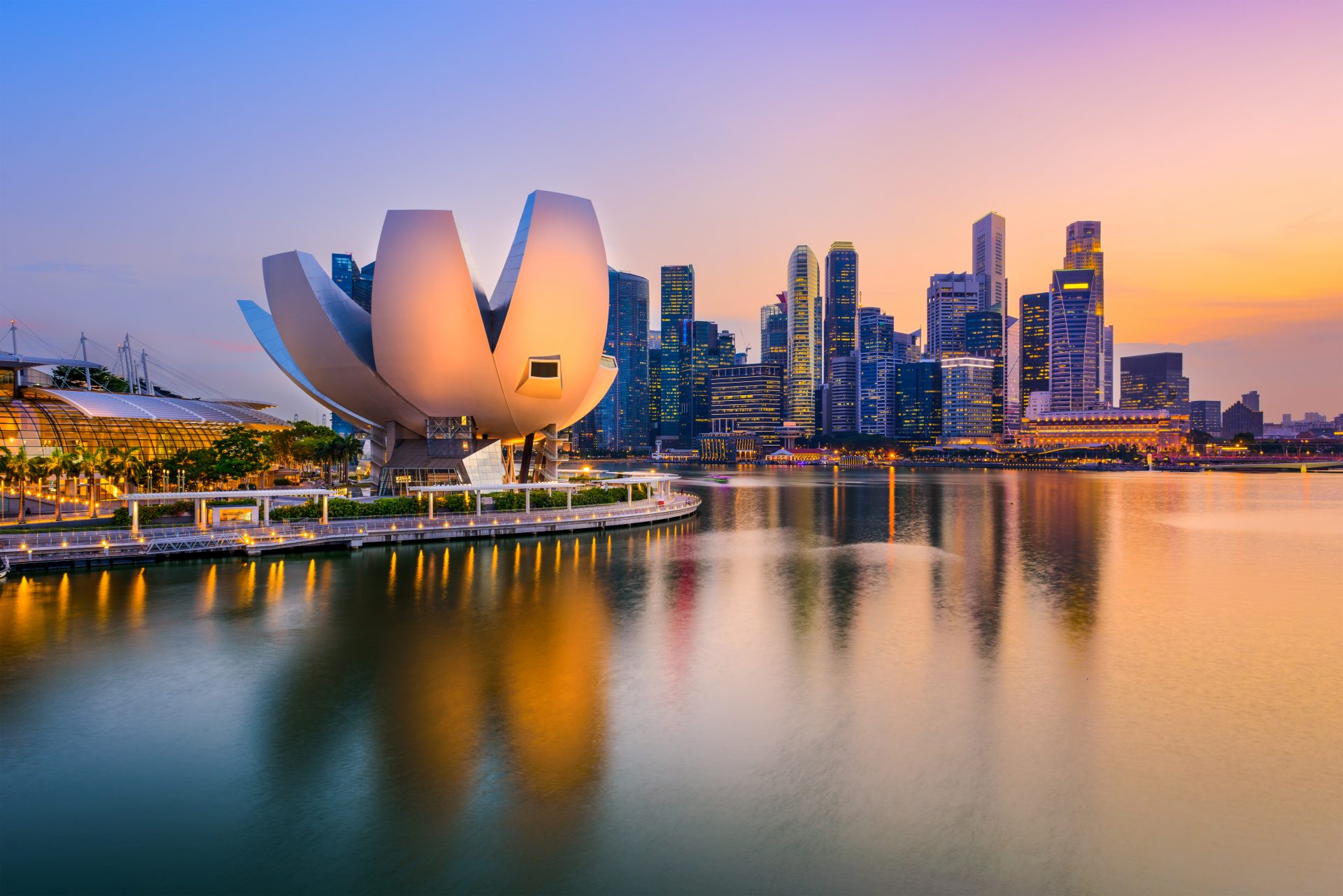 Charter a Yacht in Singapore

A Private Charter to Singapore

The island city-state of Singapore is exploding with sights and cultural landmarks that are a continuous draw for millions of visitors worldwide. Stoic are Singapore’s temples, lush are its rolling hills, and plentiful are its attractions. In Singapore, boredom is a word unknown.

If you’re feeling a little homesick from Western culture, pencil in a trip to Universal Studios Singapore, where Hollywood has come to roost in the form of an extravagant movie amusement park with sets, rides, theme attractions, and live entertainment from your favorite sci-fi, horror, or action movie. Then, get into nature by escaping to Pulau Ubin, an island northeast of Singapore’s mainland where you can hit the cycling trails, take to the footpaths, cut through the vibrantly green hills, past granite quarries, and make pit stops to traditional kampongs—or villages.

Hit Orchard Road, a busy, well-known strip of shopping malls, high end boutiques, and chic hotels that will fill your afternoon as you meander between storefronts, and make plans to dine in at one of the many restaurants along the way. In Chinatown, navigate the maze of narrow streets filled with the tantalizing aromas of traditional Chinese foods like satay, noodles, steamed rice, and Hainanese chicken dishes, all while picking up a few souvenirs on your route. Change cultural gears by adventuring through Little India, where curried dishes and the scent of cumin sits heavy on the air from the town’s famed Indian restaurants. Take a walk towards Race Course Road, pick up some authentic, handmade jewelry, and spend the day shopping at Little India’s many malls and stores.

Singapore is an endless dive when it comes to things to do and places to see and shopping is certainly among them. At Clarke Quay, you’ll find riverside shopping aplenty at this massive leisure complex, fully fitted with restaurants, designer stores to quaint boutiques, and when the sun sets, Clarke Quay lights up with its nightlife scene. Treat yourself at Resorts World Sentosa, an upscale spa and resort that pampers its guests with themed hotels, pools, and even an aquarium, and at Esplanade, a modern theater and concert hall complex on Singapore’s waterfront, see for yourself its impressive design—or better yet, get there in time for a show.

Whether you have insomnia or just want to embark on an unforgettable nighttime adventure, look nowhere else than Night Safari, Singapore’s night zoo opened back in 1994. The zoo features train rides that takes visitors through rainforests and past animals who prefer to be up when the lights are off, like elephants, tigers, and leopards. For those partial to the regular daytime hours, there’s Singapore Zoo, a renowned zoo with animals living peacefully in its 64-acre rainforest habitats.

Singapore, being an ideal spot of animal species biodiversity, also has the Jurong Bird Park, a wildlife preserve that supports housing for over 400 bird species from parrots to penguins. And for those seeking to get their fill of Singapore’s myriad of fish, plant, and animal life, check out River Safari, a zoo and freshwater aquarium where guests take boat rides through habitats for an up close look at Singapore’s thriving marine and animal species.

Take a gondola to catch a bird’s eye view from Mount Faber on the main island of Singapore to the island of Sentosa, a breezy ride across the Keppel Harbor, walk across the Helix Bridge, opened in 2010, of course drawing inspiration from the structure of DNA itself, lit up a glorious electric blue at night, and escape to Fort Canning Park, a historic landmark atop a grassy hill that often plays host to concerts and outdoor plays. See the golden onion dome of Masjid Sultan, a famous mosque built in 1824 located in the Kampong Glam Malay Heritage District, or the Sri Mariamman Temple, a 19th-century Hindu temple and the city’s oldest, so densely ornamented with deities, it demands your full attention to appreciate its ornate details.

Stroll through East Coast Park and find yourself walking along its sandy beach, white with fine sands and busy with skaters, noisy with food vendors, and rambunctious with plenty of water sport activities. Find beauty in quiet solace in Singapore’s National Orchid Garden where thousands of rare orchids grow on a tranquil hilltop, or take to the beach at Siloso Beach, an active spot where there’s always a game of beach volleyball to be played.

Singapore is known for its well established line-up of museums like the National Gallery Singapore, the Science Centre Singapore, the Peranakan Museum, the Asian Civilizations Museum, the National Museum of Singapore, and the ArtScience Museum, all worthy of a stop on your travels through this extraordinarily diverse island city-state. Spend the day in Singapore Botanic Gardens, originally founded in 1859 where thousands of plant and flower species flourish on well-manicured grounds, dotted with sculptures. Examine Buddha Tooth Relic Temple and Museum, a Tang dynasty-style temple that houses relics in elaborately designed rooms where visitors can make their way upwards to a rooftop garden.

Not too far is Sentosa, an island resort located off of Singapore’s southern coast that can be accessed by road, cable car, boardwalk or even by monorail. Here, you’ll discover the Tiger Sky Tower with sweeping, panoramic views, Palawan Beach, the Wings of Time, an impressive performance in pyrotechnics, Sentosa’s Butterfly Park and Insect Kingdom, a luxury pirate ship, an adventure park, and on the island’s west side, Fort Siloso, a still-preserved fort originally built by the British in the 1880s which guarded Singapore during World War II.

A Historic Private Charter to Singapore

Singapore is an island city refined by its modernity but still holds fast to its elegant past of temples and mosques. Yet Singapore is a leader amongst even the biggest of nations, as its known as the human capital of the world, a global hub for innovation and revolutionized industries, it’s the world’s safest, world’s smartest country—and just one of these feats is not so easily accomplished. The stars did not align for Singapore—Singapore made them so, and a charter to this accomplished island country will undoubtedly be historic because you can expect nothing less.

There’s an eclectic mix of color and culture to be found here, and Singapore is a nation of contrasts.

Chinese, Malay, Indian and Western cultures all merge together in this beautiful melting pot. Natural beauty sits alongside bustling city life, and the international cuisine and designer shopping reflects the cosmopolitan culture.

Buddhist temples are the perfect place to relax and unwind, and the arts play a huge part of everyday life here.

Glittering skyscrapers rise up from the ground, while a busy yet efficient network of city life takes place around them.

Lady Arraya NOT FOR CHARTER

VIEW ALL YACHTS IN SINGAPORE