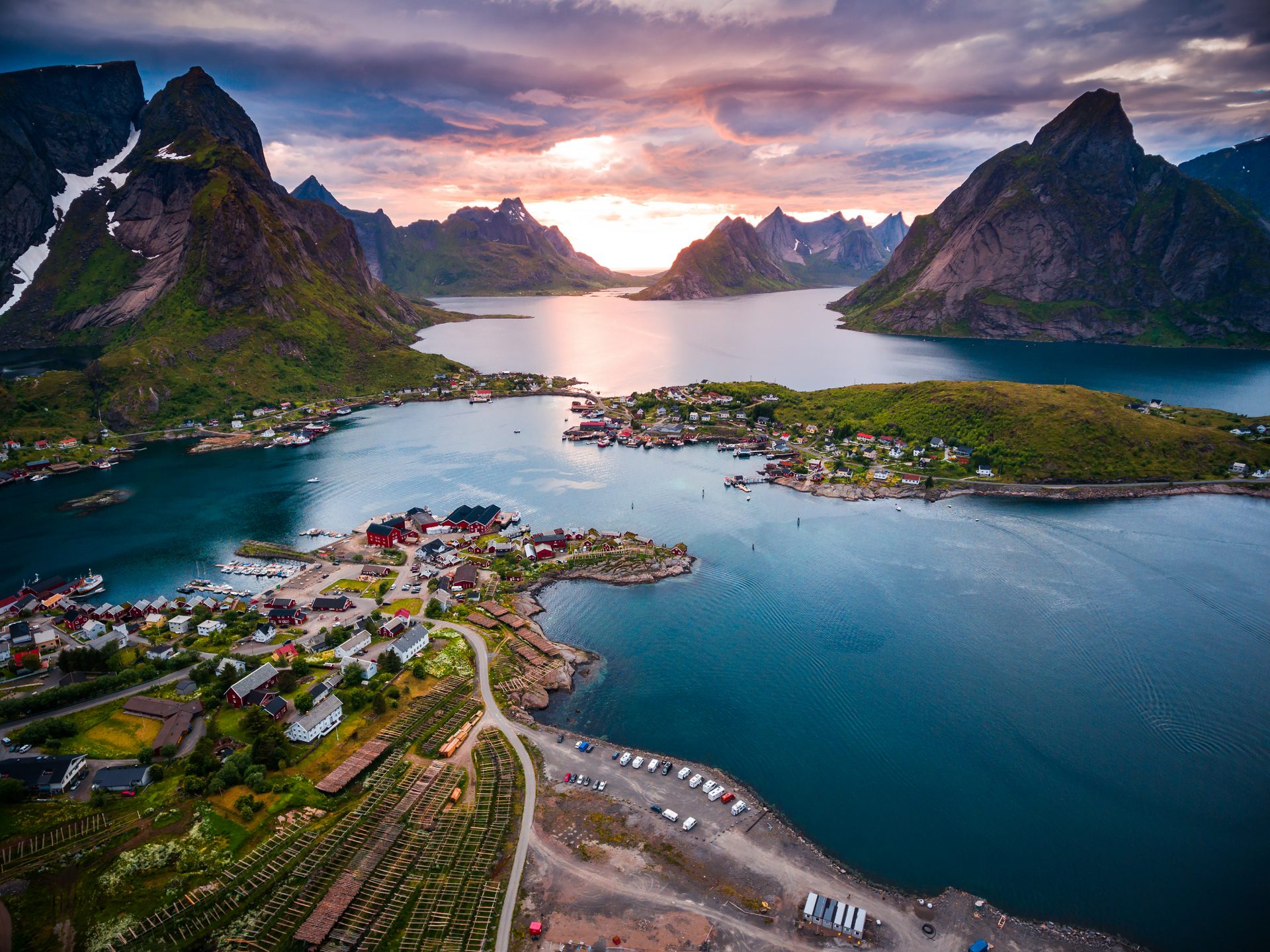 Charter a Yacht in Norway

Norway offers truly awe-inspiring views of some of the best scenery anywhere in the world. Coastlines and fjords wind their way around dramatic mountains, and Norway is a firmly established yachting hub.

Quiet bays offer a real feel of seclusion, providing the chance to relax and unwind. In contrast, cities such as Bergen offer a cosmopolitan vibe against a backdrop of culture and history. A number of buildings found here are listed as part of a World Heritage Site.

This area is an ideal vantage point for the Northern Lights, providing usually calm waters, ideal for a charter vacation.

Welcome to the land of dualities. Will you embark on your charter when Norway becomes the “Land of the Midnight Sun,” where the sun doesn’t quite set from May to July, or when Norway descends into a dim twilight, the “Land Where the Sun Doesn’t Rise?”

Regardless of the time of year you choose to set sail, Norway’s landscapes remain steadfast in their penetrating, dramatic beauty, whether it lies beneath a blood-red midnight sun, or becomes drenched in virgin snow.

Your Private Charter Itinerary to Norway

Oslo, the nation’s capital, perfectly encapsulates the long winding history of Norway in the form of its landmark buildings, museums, theaters, and stadiums. Begin at the Royal Palace, a humble, stately building with a pale yellow glow, which is not easily missed in Oslo’s center, at the top of the mall way of Palace Park. Catch glimpse of Norway’s unique past at the Viking Ship Museum, where in a rarity, visitors can get an up-close look at three, beautifully restored ships, amongst other treasures unearthed from the Viking age. At the Resistance Museum, the country’s bravery and rebellion during World War II is epically told through relics, harrowing survival stories, and interactive displays.

The National Museum presents Norway’s renowned collection of art, painting an intricate picture of cultural life throughout the ages in the great nation, and similarly, there’s Oslo’s Munch Museum, a deep dive into the mind of Edvard Munch, the artist behind The Scream, who donated his works to the city after his death. The Vigeland Museum contains over two hundred sculptures by the famous artist Gustav Vigeland, and for an open air experience, don’t miss Norsk Folkemuseum, where houses throughout the ages have been accurately brought to life on its grounds.

The city is more than an embodiment of Norway’s centuries-old journey towards its modernized, independent nationhood. Oslo serves as an international platform for Norwegian outreach, with the Nobel Peace Center, the Royal Palace, its slew of esteemed universities, the Parliament, the City Hall, all of which allow for the nation of just 5 million peoples to be globally recognized.

Norway’s fjords are among the most sought out natural wonderments of the world. Geirangerfjord is akin to a fantasy world, with green hills spilling into mirrored waters and dramatic, snow-peaked mountains in the distance. Preikestolen rewards hikers with panoramic views after a nearly 2,000-foot climb. The narrow fjord of Nærøyfjord is well known to travelers seeking still, quiet waters contrasted with steep, staggering mountains. Aurlandsfjord claims the title of Norway’s longest fjord and there isn’t a spot along it with disappointing views. It runs eighteen miles along astonishingly towering cliffs, coated with vibrant, lush vegetation.

The Sámi people, indigenous to the Far North, assimilate true Norwegian pride in their way of life. The Sámi have fought to maintain their cultural history and livelihoods in Norway, and so by visiting a reindeer camp near Tromsø. You will not only be honored in being a guest among the Sámi, but you will be given the opportunity to spend a day feeding and sledding with their beloved reindeer. Learn about the Sámi culture and traditions from the people themselves, hear stories passed down from their ancestors and their traditional singing of yoik, and absorb their worldview that shows an unsullied and deep appreciation for the natural world.

The North Cape graces its travelers who have toiled the journey to the tip of Magerøya in Northern Norway with unrivaled views of a striking midnight sun setting over the fussy, white-tipped Barents Sea. Waiting for you here is North Cape Hall, topped with a fat globe and glass panels, presenting panoramic views. Iconic Norway lives in Bryggen, where a medieval wharf is pristinely preserved in the town’s historic harbor district, lined with bright yet quaint wooden boathouses.

You might feel small taking a hike along Trollstigen, a mountain road with sharp turns that cut through the bright green mountainside, but that’s part of Norway’s uncontainable beauty. Feel even smaller near Gladhøpiggen, Scandinavia’s icy and highest mountain at just over 8,000 feet. For something more palatable, visit Jotunheimen National Park, where you can explore wildlife amongst its rugged terrain, or hit the glacial slopes at Folgefonna and ski through crisp air. At Briksdalsbreen, surround yourself with waterfalls and reach the Arm of the Jostedalsbreen Glacier by means of a hiking trail, and Seven Sisters Waterfall, take in the 39th-tallest waterfall in Norway.

The Atlantic Ocean Road traipses through an archipelago in Eide and Averøry in Møre og Romsdal, crossing through skerries and uninhabited islands, over bridges and causeways towards flat lands that give way to looming mountains on the horizon. Fishing, camping, or road tripping, this five-mile road offers some of Norway’s best sights. Stellar views also await at Ulriken, a mountain with an aerial tramway guiding its guests to the peak for a hot meal, cold beer, and unmatched summit scenes.

At Rodane National Park, you will be walking through the country’s oldest national park, with its ten soaring mountain peaks, skiing and hiking trails, and home to Norway’s wild and majestic reindeer. Besseggen is a hotspot for hikers, taking its travelers across the spine of a mountain in Jotunheim National Park, and at the edge of Geiranger valley sits Dalsnibba in its mighty glory, a 4,800-foot mountain that casts its shadow over the village, fitted with a private toll road that curves upwards towards its summit.

The Northern Lights dance across the night sky, gracing fortunate onlookers with its presence. Greens, blues, yellows will streak across long-exposure pictures, but in actuality, the Lights are white whispers that shimmer across the sky, somehow even more magical in person than any photograph can do it justice. Take on the challenge of hunting them with a Northern Lights Chase, or perhaps you’ll be lucky if you find yourself outside at nightfall during their peak season.

Journey to Norway on a Private Luxury Charter

Norway, crafted with staggering mountain ranges, snow-laden and imposing, with valleys, alive with lushness that spill into glimmering fjords, has an irrevocable beauty that remains nonpareil to anywhere else on the planet. There’s care and grace in the Norwegian people, the Sámi included, who express intense veneration in their lands, their wildlife, their history, and their culture, making the draw to this astounding nation even more compelling. 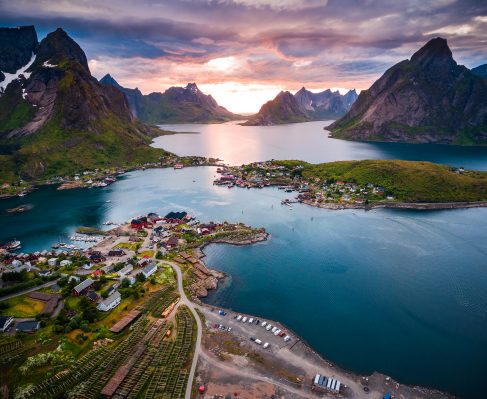 Crystalline structures lie across the green expanse of land and…

VIEW ALL YACHTS IN NORWAY