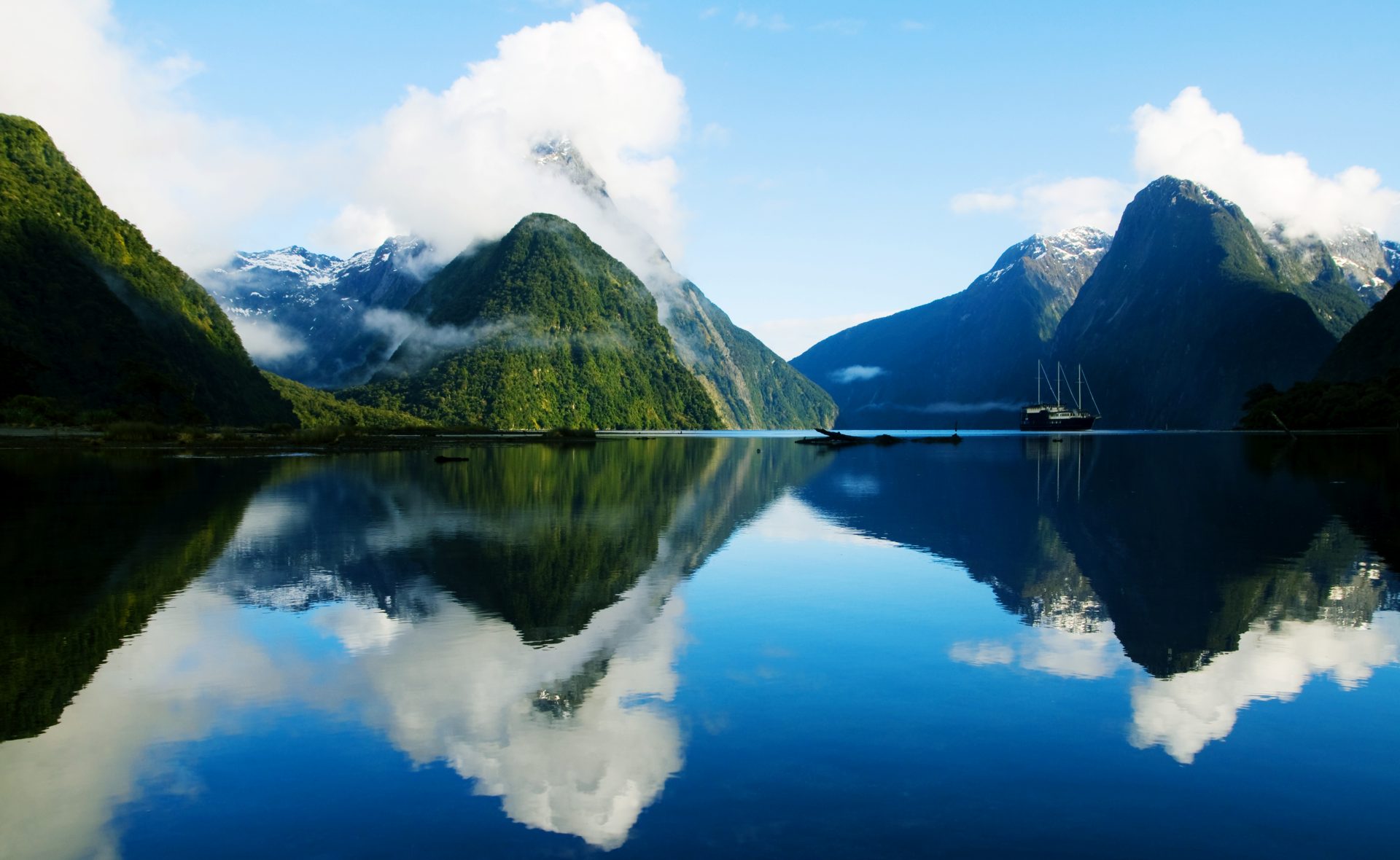 Charter a Yacht in New Zealand

New Zealand is a vibrant, beautiful, untamed country, full of adventure and discovery.

Whether wine tasting or white-water rafting, there is something for everyone, offering unforgettable experiences sure to last a lifetime. Semi-tropical lakes and yellow sulphurous lakes are simply spectacular, and hot sandy beaches create the perfect place to relax and unwind.

Active volcanoes and thick mountainous forests provide a real sense of adventure for thrill-seekers, while a wealth of cosmopolitan cities attract worldwide travellers.

The Maori culture is interesting, fascinating and welcoming, and winter brings a wealth of winter sports.

A Private Charter to New Zealand

New Zealand is ubiquitous. You have seen its rolling green hills, its mirrored lakes, its sharp, snow-tipped mountain peaks, and its wide plains that meet curved sandy shores. New Zealand has it all, an undeniable diversity that takes root in its shifting terrain and mystifying landscapes.

The island country lies close to Australia across the Tasman Sea to the east, and just short of the Pacific islands to the south. Despite being one of the last landmasses to be settled by humans, specifically the sea-faring Polynesians, New Zealand has earned its way into the ranks of internationally recognized, developed countries.

It’s short sprint to becoming its own independent country with a lucrative, prospering economy and peoples wasn’t without the intervening crown of the British Empire, who to this day remains the official head of state.

When chartering New Zealand, you’ll see the land neatly divided into North Island and South Island, with about 600 smaller islands dotting its nearby waters, all with their own unique personalities. Step foot on New Zealand’s lands and explore its natural curiosities of crags, fiords, geysers and hot springs, lakes with waters so still, they look like glass, mountains that begin with lush greenery and end, tipped with snow, and dive into the history and culture of the Maori peoples, indigenous to this enchanting country.

New Zealand’s largest city of Auckland is situated around two large harbors on North Island, often dubbed the “City of Sails” due to the hundreds of ships that flock its bays. At Viaduct Harbour, you can join the ranks of your fellow superyachts, while ascending the iconic Sky Tower to view their enormity and impressiveness from above. Meanwhile, at Waitematā Harbour, get your blood pumping with an afternoon of bungee jumping followed by a restful day sailing on the water beneath Auckland’s bright sun. In the city, traverse through Queen Street, where the populous thoroughfare will fulfill all of your shopping needs between Queens Wharf and Karangahape Road.

Gamble away your day at SKYCITY Auckland, or feel like a kid again at Rainbow’s End, an expansive amusement park. And don’t miss the Auckland Zoo, where over 130 species of animals, both native and exotic, can be seen. There’s Sea Life Kelly Tarlton’s Aquarium, where visitors can walk through glass tunnels to spy unique marine life, and Auckland Domain, the famed city park that contains museums, memorials, and not to mention the entire blast crater of the Pukekawa volcano.

Next-door is Waiheke Island, the second-largest island in the Hauraki Gulf of New Zealand where you can grab a ferry to enjoy a day of zip-lining, beach bumming, or sipping wine from one of its many vineyards. Rangitoto Island near Auckland has a bit of a different, more dangerous feel, thanks to the looming, distinctive shield volcano that can be seen from Auckland’s One Tree Hill volcanic peak memorial. The impressively symmetrical volcano has 300 steps beckoning visitors to make the climb to see some of New Zealand’s most stellar views from its summit.

Fiordland National Park in New Zealand’s South Island hoards glacier-carved fiords of Doubtful and Milford sounds. The serene waters of Mirror Lakes reflect the rugged ridges of Earl Mountains, and forest trails take trekkers along sandy shores and across bridges to thundering waterfalls. At Abel Tasman National Park, you’ll hear of the Coast Track, a long, winding trail that takes its travelers over beaches, ridges, past fur seal colonies, near sunny Golden Bay. Fox Glacier, one of the most accessible glaciers in the world, is an easy hike in Westland Tai Poutini National Park, and well worth the visit.

In Waitomo Caves on the North Island, glowworms light the way through an exhaustively intricate underground cave system. Above ground elsewhere on the North Island, is Tongariro National Park, fitted with three active volcanoes (one of which was casted as Mount Doom in The Lord of the Rings films for all of the super-fans out there). Here, you can grab a set of skis and hit the slopes of Ruapehu, hike the Tongariro Alpine Crossing trail past the Emerald Lakes, with a stop at the boiling mud pools, or perhaps you’ll be lucky and spot the native brown kiwi or blue duck.

Lake Taupo, the largest lake in New Zealand’s North Island, is cupped by the caldera of the Taupo Volcano, but the best view is one from the sky, as the spot is hugely popular for skydiving. On the ground, you’ll discover elaborate Māori rock carvings, a link to New Zealand’s legends of the past. Visit New Zealand’s only castle, a Scottish baronial-style estate named Larnach Castle, built in 1874. Trek along the Kepler Track, where you’ll find your footing on the spines of mountains, through mossy forests, deep gorges, wetlands, roaring rivers, and flat, glass-like lake shores.

And now for something completely different: Waiotapu. The name is Māori for “sacred waters”, an accurate description of the dramatic changing colors that ignite the pools of geothermal reserve. Bright yellows, cool greens, fiery oranges all can be seen in the Central Pools, the Artist’s Palette, where at the Champagne Pool, bubbling waters are lined by earth-red sands.

Cathedral Cove, secluded and tropical will draw you in with its sandy shores and rock formations, Aoraki/Mount Cook National Park is wild, mountainous, and will reward you with icy glaciers, a hike along Milford Track will gift you with stunning fiords, bright green forests, booming waterfalls, and definitive mountains, and Ninety Mile Beach will take you along its sand dunes and scenes for an unparalleled scenic adventure.

There isn’t a place in New Zealand that should be missed. Every greened hill, every breathtaking fiord, every deep, unmistakable gorge, and every staggering volcanic peak holds unrivaled natural beauty, so much so, that no travel guide can truly do this island country justice. Travel New Zealand for Kiwi pride, travel it for the fiords alone, travel it for its countless tracks that take you through its glorious terrain, travel it for the Māori history, for its volcanoes, proud cities, or for its food. Whatever your reason, you need only one. 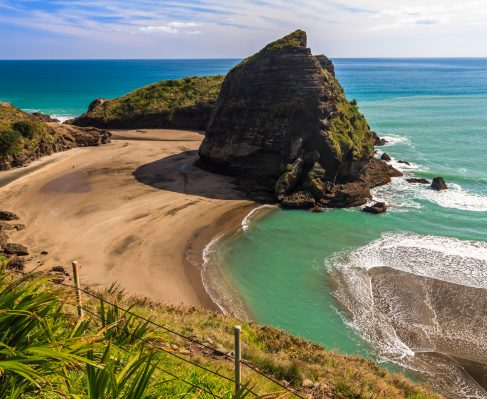 VIEW ALL YACHTS IN NEW ZEALAND