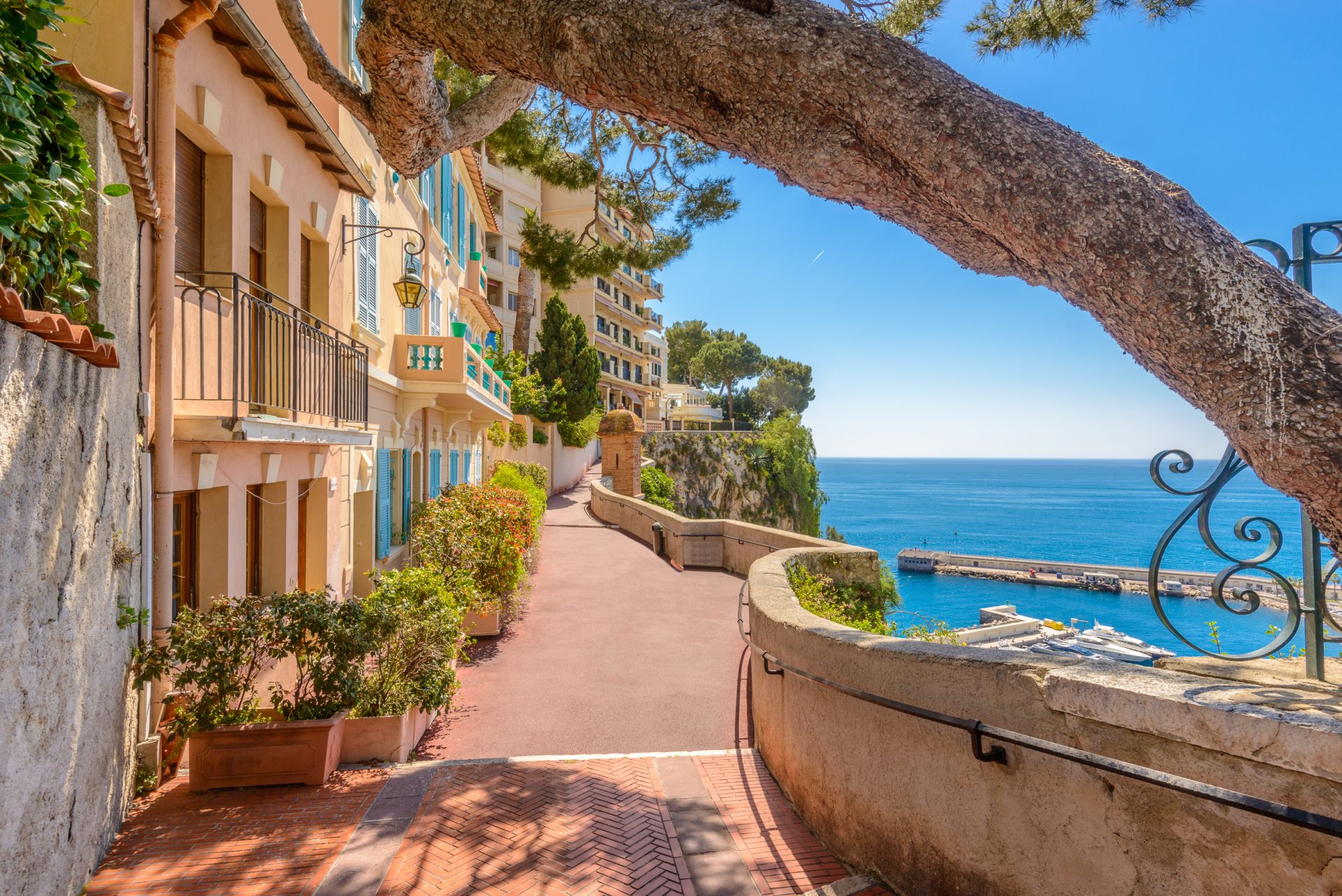 Charter a Yacht in Monaco

A Private, Luxury Charter in Monaco

What does the world’s second-smallest country have to offer? Everything.

Monaco quietly rests along the French Rivera. As you walk along its sun-soaked streets you’ll hear Italian, Monégasque, and English, smell the delightful blend of Mediterranean and French cuisine, and see the touches of influence from the long-reigning Grimaldi family.

So as you set sail along the French Rivera, find yourself in Monaco. Like most, you’ll think a day will do, but the richness and elegance of the petite sovereign city-state will surely charm you into extending your stay a little longer.

Your Luxury Charter Itinerary in Monaco

The Casino Monte-Carlo is where people flock first. The iconic casino doubles as a ballet and theater complex, originally brought to life by the business-minded Princess Caroline over 150 years ago. Its opulence is evident in the gorgeously manicured grounds and sheer decadence of its Beaux-Arts construction. Even if you don’t fancy yourself a gambler, you can bet that the sight alone will draw you in.

Monaco isn’t short on casinos. Casino Café de Paris is open twenty-four seven, complete with two terraces, outdoor patios, slot machines, and table games aplenty. There’s also the Sun Casino, if you haven’t had your fill, a luxurious center that functions as a hotspot in town and the place to hedge your bets.

Away from the bright lights of its flashy hotels and casinos is the Rock of Monaco, a place that offers the best view overlooking Monaco’s port, a quiet breath of nature in the midst of the busy city. There’s also Larvotto Beach, where one can truly appreciate Monaco’s refined beauty in its perfect sands and vibrant waters.

The Prince’s Palace of Monaco is a sight to behold—constructed in 1191 and originally intended as a Genoese fortress, the beautifully designed stronghold has seen many dramatic events in its long history. You’ll also find the Jardin Exotique de Monaco, gorgeous gardens filled with succulent plants hailing from all around the world in an open-air presentation. Monaco further reinforces your connection to its breathtaking nature in its Zoological Garden of Monaco, St. Martin Gardens, Princess Antoinette Park, Jardin du Casino, and its UNESCO Garden.

Clearly, Monaco was favored by the royals, as made evident in the astounding architecture that transcends the city into nothing short of first-class luxury. But here in Monaco, its royal visitors left their mark in the city beyond its elegant accommodations, statuesque architecture, and upper class atmosphere.

Prince Albert I, Prince of Monaco, established the Oceanographic Museum, a comprehensive and beloved landmark in Monaco dedicated to sharing knowledge and love of the oceans. Prince Albert I spent his life championing marine research and the Oceanographic Museum reflects his immense passion for oceanography, and who could better serve as director of the museum than none other than renowned researcher and explorer, Jacques-Yves Cousteau? Appropriately located on the rising cliffs in Monaco-Ville, the museum is more than a tourist attraction but a piece of Monaco’s national identity, forever tying it to the ocean it overlooks.

In Monaco, the sea is not only at its doorstep, but it is the city-state’s way of life. The food made by the hands of local chefs lives and breathes the salty waters of the ocean, just as the fish do. Brandamincium, where cod is served alongside a delectable garlic and herb cream sauce, can be found in nearly every restaurant as it’s one of Monaco’s favorite way to enjoy their freshly caught fish.

Socca is sighted on the streets in market stalls, as vendors fry up these thin crêpes made of chickpea flour in enormous cast iron pans. For a quick afternoon snack, pick up some barbaguian, a fritter stuffed with spinach and leeks, and satisfy your sweet tooth with Fougasse, a pastry born from orange flower water, coated in almonds and nuts, and tastes as magically unique as it sounds. And if you’d rather take up arms in the kitchen yourself, there’s Monaco’s Frontvieille Shopping Center and Carrefour supermarkets overflowing with fresh fish, local vegetables, and homegrown you-name-it.

Monaco has a penchant for cars that are luxurious and fast. Monaco Top Cars Collection gives you a peek into the vintage car seen—nearly one hundred of them, all collected by Prince Rainier III of Monaco and pristinely presented in a five-story museum. And if that doesn’t fulfill your desires, stop by when Monaco is hosting its Grand Prix, where Formula One racecars suit up to zoom through the streets of Monaco during this epic annual event. Additionally, the Monte Carlo Rally entertains thousands each year, similar to the Grand Prix in both its prestige and difficulty.

Stray wanderings throughout this glamorous city may take you to the Museum of Prehistoric Anthropology of Monaco, the Napoleon Museum, or the Naval Museum, if you’re educationally thirsty for the utterly unique and dramatic history of this petite city-state.

Dream Big with a Luxury Yacht Charter to Monaco

Those that travel to Monaco become fiercely loyal to the small sovereign state. There’s something about its polished cityscape that makes its visitors and locals irrevocably fall in love. Despite its restrictively tight borders, Monaco has established its own unique identity, making it a distinct player in the French Rivera, one that so many have toiled to make it the proud, elegant, and second-smallest country it is today.

VIEW ALL YACHTS IN MONACO